About 150 kilometres from Nagpur, in Yawatmal district lies this small sanctuary called Tipeshwar, named after a God of the same name. The sanctuary represents the dry deciduous forests of the state and the pre-monsoon landscape could be out of a film. Nothing quite prepares you for the amazing array of wildlife that one can spot despite the extreme conditions. What takes you by surprise is the number of tigers that inhabit this 150 sq kilometre area and can be spotted. The Forest Department have to be complimented on their wonderful work on establishing waterholes throughout the area that represent true innovation and technology. Each waterhole has a solar panel that derives enough power to pump water into the waterhole. It is at one such a waterhole that we had the most exhilarating experience of watching an adult female tiger wallow in the water, followed by her two sub-adult female cubs. The sanctuary gets a lot of day visitors from Nagpur as well as Adilabad in Telangana. However, Tipeshwar still remains relatively unknown for the other tourists who flock larger protected areas such as Tadoba. Perhaps it is these hidden gems that will help nurture and conserve wildlife populations in the country as the larger known protected areas gets inundated with tourists and resorts choke their peripheries.

Posted by Seema Bhatt at 8:20 AM No comments:

There used to be a narrow gauge train in Maharashtra from Pandharpur to Latur. Known as ‘Devachi Gaadi”, or the train to the Gods, this train carried pilgrims to the religious city of Pandharpur. The narrow gauge has long since been discontinued, but the line still runs through what is now the Yedshi Ramling Wildlife Sanctuary.  In the Osamanabad district, this dry deciduous forest sanctuary is home to a range of fauna that include wolf, fox, blackbuck and hare.  A 100 species of birds have been recorded here. The sanctuary has been named after the famous Ramling temple. It is believed that Lord Ram sought refuge here during his long banishment and also where Jatayu gave his life for his lord.

There is also something else unique about this place.  The narrow gauge tracks are in disuse, the train station a ramshackle shell, but what is still intact is the railway guesthouse. Built in 1907, this heritage building is very much in use as a guesthouse with four exquisite suites.  The beautiful mosaic floors have been maintained as also the old antique furniture. There is also a quaint model of an old inspection trolley. One hopes that this beautiful guesthouse continues to be managed as a heritage property. 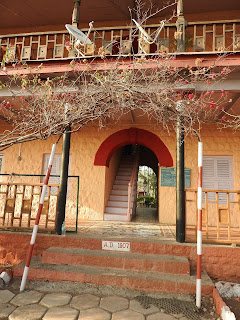 Posted by Seema Bhatt at 8:36 AM No comments:


The Peacock Sanctuary: Protected by an Age-old Edict


Have you heard of a peacock sanctuary in India? There is actually one spread over 30 sq km, located in the Beed district of Maharashtra. The sanctuary boasts of over 7000 peafowl along with other fauna that includes blackbuck, fox, porcupine and jungle cats. An ideal weekend destination for bird watching and just walking through the nature trails if one lives in the vicinity. One wonders how so many peafowl live here safely despite the fact that the sanctuary itself is honeycombed with private agricultural land. Legend has it that there was a spiritual figure, Awaliya Baba, called Madershan who meditated under a banyan tree in this very place ages ago. It was this Baba who advised farmers not to harm peafowl despite the damage they caused to crops. It is believed even today that if peafowl are harmed in this area, then the crops will fail. Thousands visit the Baba’s shrine every year to pay homage to him. Baba’s protection still prevails and peafowl roam fearlessly further supported by their home being safeguarded by the declaration of the wildlife sanctuary.

Posted by Seema Bhatt at 6:38 AM No comments: 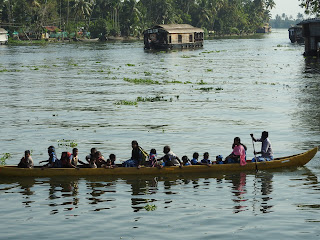 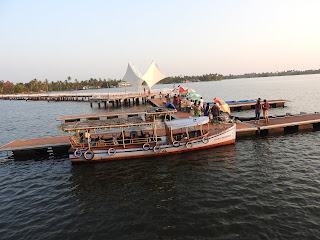 The Kerala Backwaters: A Trip down Centuries
The Kerala backwaters always evoke images of an exotic tourism destination where one takes a lazy boat ride through the green countryside of Kerala. High-end resorts offer dream packages for the same. Little do people realise that these backwaters have been the lifeline for local people for centuries. These waters are used by local people as the key trade route as also for their daily needs of water for cooking, drinking washing, fishing and agriculture. While we did a wonderful 24 hours at the beautiful Vasundhara Sarovar at Vayalar, the eye-opener came the next day on a field trip to Kuttanad, the rice bowl of Kerala. A one and half hour cruise through the backwaters would bring us to Kuttanad. It is only during this time that you understand the complexity of this ecosystem. Along the Malabar Coast, on the shoreline of the Arabian Sea is a network of brackish lakes and lagoons connected by natural and man-made canals. This network covers over 900 km of waterways and is fed by 38 rivers. As we take the cruise the evidence of local use is there to see. Besides, the tourist luxury boats are large barrages that carry produce, boats that transport children to school and small individually navigated boats as personal transport.  The Kuttanad region has within intertwined water canals, wide-spread agricultural fields that include paddy, banana, cassava and yam. It is a fascinating system where crops are cultivated in the low-lying areas and irrigated by freshwater from waterways and canals. This was the worse hit area during the recent floods when agricultural fields were inundated with salt water. While local people do benefit from tourism, there is now some disquiet as tourism becomes overwhelming. We left with a bad taste with the parting statement one of the locals who said, “Even the fish is tasting of diesel these days’. Will tourism kill this beautiful ecosystem? 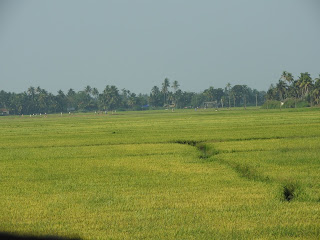 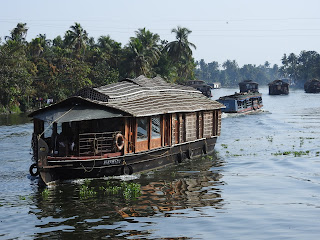 Manglajodi: From Poaching to Ecotourism

An early morning in the 1980s. A village in the backwaters of the famous Chilika lake, called Mangalajodi, rich in birdlife. Kishore Behera navigates his boat. His early morning tryst is with the birds that he catches for meat while he is also fishing. Fast forward to the 2000s, it is also an early morning in Mangalajodi and Kishore Behera has tryst with birds, but not to catch them. He is taking a group of avid birdwatchers to show them the rich birdlife of the area. In the early ‘80s, Mangalajodi was known as a ‘Poaching Village’. Birds were killed indiscriminately.  There was a local belief that migratory birds vising this area had better meat, particularly for to be fed to pregnant women. Fishing was also difficult, while poaching of birds was less labour intensive as also lucrative. Kishore Behera in particular was said to have the power to attract birds. He never killed them but sold them live, as per preference.   In the late 80s, an alarm call was raised as the bird population in the larger Chilika system started declining. Since both the then Chief Minister and Chief Secretary were both from the region, there was an added impetus to look into this issue. There were concerted efforts by the Chilika Development Authority to stop poaching. More awareness was generated to dispel the myth about wild bird meat and diversified livelihood options worked out. There was also a campaign against the bird poachers. 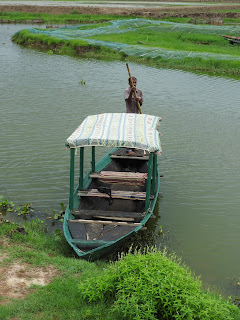 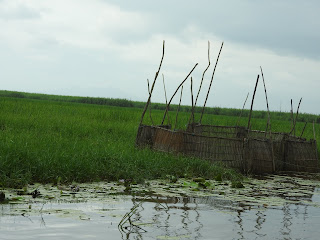 In 2008-2009, the RBS Foundation India, (The Royal Bank of Scotland Group), stepped in to support ecotourism activities in Mangalajodi. The RBS Foundation worked through its implementing partner, Indian Grameen Service. What was a haven for poaching turned into a birdwatcher’s paradise. Poaching activities turned into ecotourism activities and poachers turned into birding guides. There was intensive training on birding issues for potential guides. There was a steady income, and a sense of pride and ownership.  Since Mangalajodi was part of the larger Chilika ecosystem, bird scientists came from the Bombay Natural History Society (BNHS) as also other NGOs such as Wild Odisha. As interest in Mangalajodi grew as a birding destination, four boats were bought with support from the RBS Foundation. Two rooms were refurbished to examine the feasibility of tourists staying over. In 2009-2010, the Mangalajodi Ecotourism Trust was established with support from 12 people that included former poachers and activists.

Mangalajodi gets over 3,00,000 birds particularly in the winter. The rare river lapwing has been spotted here in the last few years. Out of the 856 families here, over 200 families are involved in tourism-related activities. The Mangalajodi Ecotourism Trust (MET) works with 100 families. Members of these families, besides being employed as guides, also supply vegetables to the tourist facility, are employed as auto rickshaw drivers and boatmen and are involved in other allied services. The enterprise earns substantial revenue as the number of tourists has gone up from about 300 in 2009-2010 to over 2000 in 2017-2018. It also won the prestigious 14th UNWTO Awards for innovation in Enterprise 2018.

Our visit there was so fulfilling with a boat ride, a delicious meal and recounting of the entire journey by Reena, the enterprising young lady manager, a local herself. 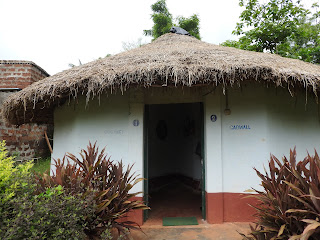 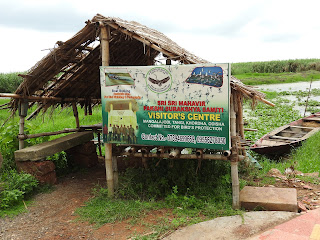 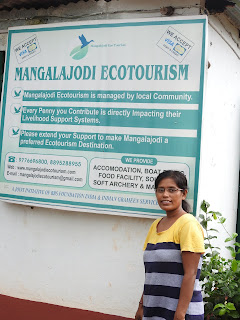 Posted by Seema Bhatt at 6:06 AM No comments:
Older Posts Home
Subscribe to: Posts (Atom) 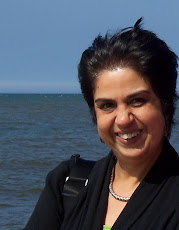 Seema Bhatt
Seema Bhatt is an independent consultant (based in India) working on issues related to ecotourism, biodiversity and climate change across the Asia region.